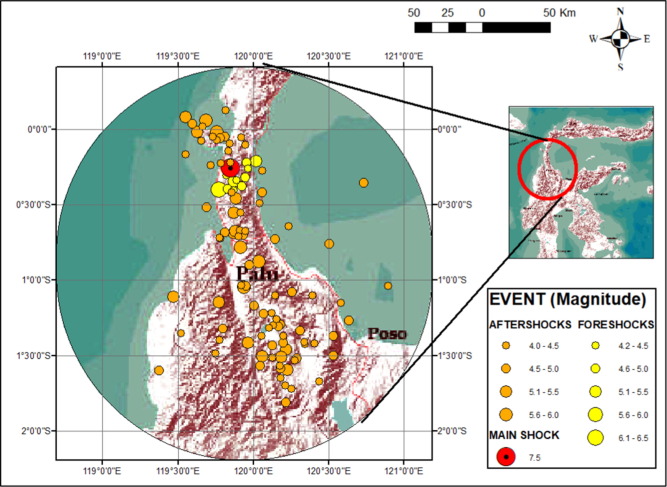 There was a shallow earthquake in the Central Sulawesi province of Sulawesi island of Indonesia with a moment magnitude (Mw) 7.5 on 28th September 2018 at 18:02:44 local time. The event was preceded by major foreshocks and followed by aftershocks of significant magnitude. The epicenter of the main shock was in the Donggala regency of Minahasa peninsula of Central Sulawesi, approximately 70 km from the provincial capital of Palu. The earthquake was caused by the tectonic movement of the left lateral Palu- Koro fault within the Molucca Sea microplate, triggering major geotechnical failure and structural damage in Palu city and Sigi regency. Thousands of people died or are still unaccounted for, and countless others were injured. Balaroa, Petobo, Jono-Oge and Sibalaya were the worst hit mainly due to large-scale flow-slides and mud flows. It was the first time that such large-scale flow failures were triggered by an earthquake, and that the failure of very gentle sloping ground swept away whole localities. The objective of this research was to provide insight into the scale of ground failure and other infrastructural damage caused by the event, especially in Jono-Oge area, where the flow distance was longest. The authors performed preliminary and detailed surveys in the area twice by conducting Portable Dynamics Cone Penetration Test (PDCPT), collecting disturbed and undisturbed samples and using aerial drone (UAV) photography. The findings of the reconnaissance survey are described here along with subsequent data interpretation. Finally, the mechanism of the flow-slides is discussed.